Signature Publishing’s Gabby’s Dollhouse magazine is based on DreamWorks Animation’s popular series, from which Spin Master has also developed a hit toy range. 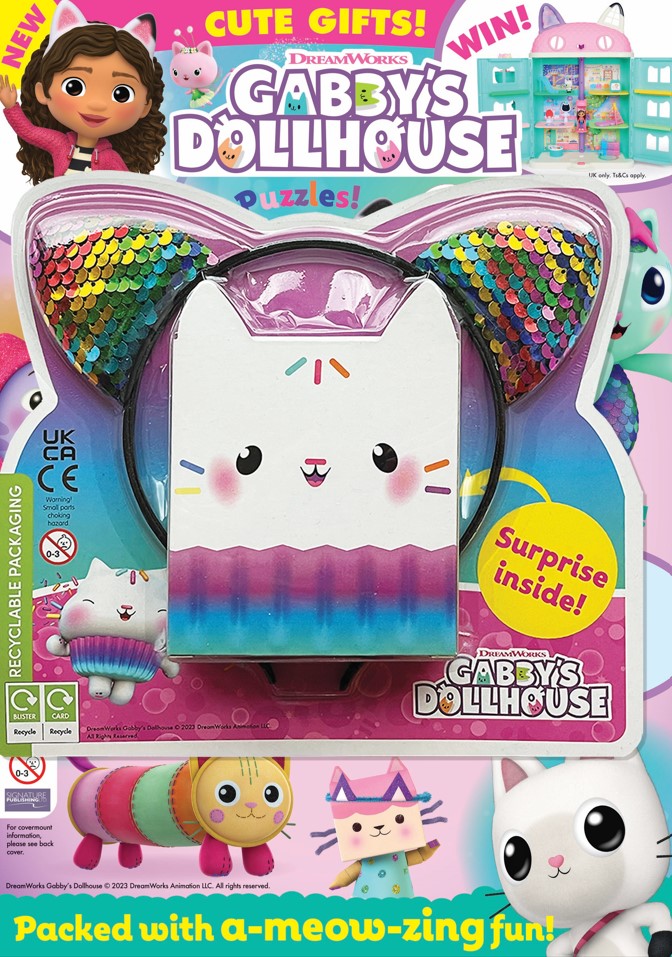 Based on DreamWorks Animation’s hugely popular TV series on Netflix and Tiny Pop, as well as Spin Master’s hit toy brand for the show, the magazine will launch on 25th January and be available at supermarkets and newsagents.

Created and executive produced by celebrated storytellers Traci Paige Johnson and Jennifer Twomey, Gabby’s Dollhouse is a mixed media pre-school series that unboxes a surprise before jumping into a fantastical animated world full of adorable cat characters that live inside Gabby’s dollhouse.

Gabby’s activity-based episodes encourage flexible thinking and learning from mistakes and the popular series has inspired many expansions including a successful toy line, publishing, original music, a top-rated app and a growing YouTube channel garnering millions of weekly views.

Gabby’s Dollhouse magazine brings the magic of the hit series to life, enchanting and engaging pre-schoolers and supporting early learning through stories, puzzles, colouring, crafts, games and cookery, plus every issue comes with surprises, adorable kitty characters and gifts.

“Gabby’s Dollhouse is one of Netflix’s top pre-school programmes, and the Gabby’s Purrfect Dollhouse play set has become one of the most wanted toys for Christmas 2022, so we are over the moon to be publishing the regular, stand-alone magazine,” said Amanda Clifford, Signature Publishing’s editorial director. “The response to the first two Adventures With… Gabby’s Dollhouse magazines from children, parents, retailers and Universal Products & Experiences was incredible.”

She added: “With more amazing episodes being created, more toys going on sale and more licensees coming on board, Gabby’s Dollhouse is set to be the hot property for 2023. It’s magical, funny, creative and full of gorgeous kitty adventures – all of which will be reflected in every page of the magazine.”