Richard Dickson, president and COO of Mattel, spoke to Licensing.biz about the Barbie brand, the upcoming movie and the plans for yet more growth. 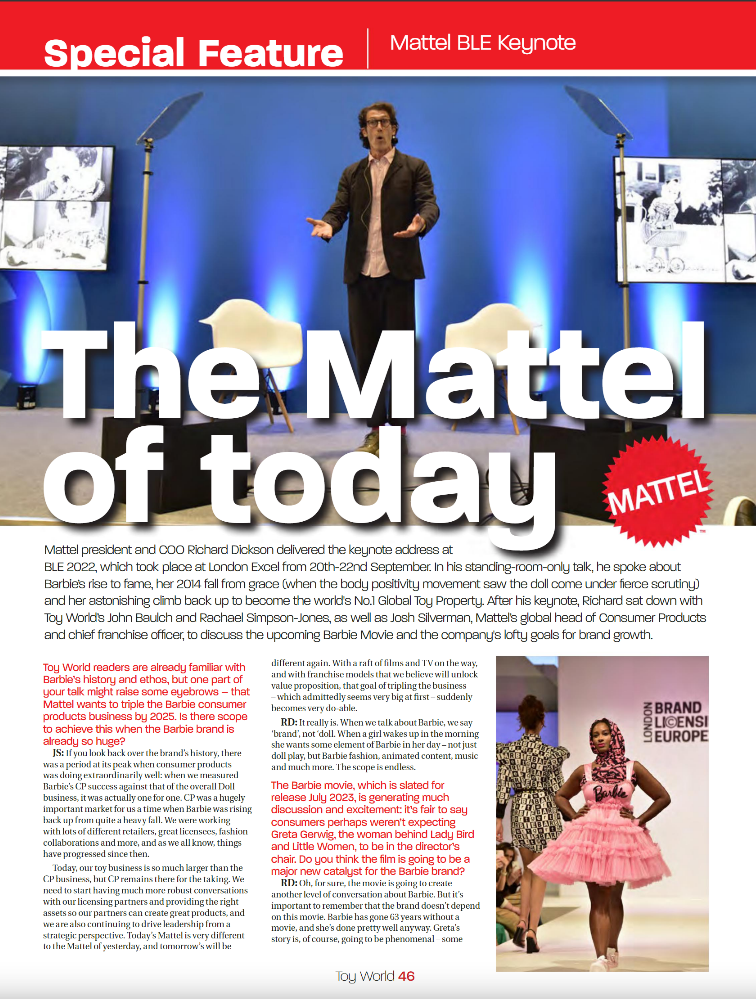 Richard delivered the keynote address at BLE 2022, which took place at London Excel from 20th-22nd September. In his standing-room-only talk, he spoke about Barbie’s rise to fame, her 2014 fall from grace and her astonishing climb back up to become the world’s No.1 Global Toy Property. After his keynote, Richard sat down with Licensing.biz’s  John Baulch and Rachael Simpson-Jones, as well as Josh Silverman, Mattel’s global head of Consumer Products and chief franchise officer, to discuss the upcoming Barbie Movie and the company’s goals for brand growth.

We asked Richard’s about the part of his keynote when he said that Mattel wants to triple the Barbie consumer products business by 2025: is that going to be possible considering how big the brand already is? Richard and Josh commented on Barbie’s history and how Barbie is a brand, not just a doll. Numerous licensing partnerships, they told us, a franchise model that spans fashion, animated content, music and much more, and a CP business still there for the taking means tripling of the business is certainly do-able.

We also asked if Mattel believes the upcoming Barbie movie is going to become a new catalyst for the brand. Richard commented: “Oh, for sure, the movie is going to create another level of conversation about Barbie. But it’s important to remember that the brand doesn’t depend on this movie. Barbie has gone 63 years without a movie, and she’s done pretty well anyway. The movie will be a huge tentpole moment for Mattel and Barbie, and will drive enormous sales of Barbie licensed merchandise, but Barbie will always be expressed in numerous different ways.”

Richard also explained the opportunities presented by Mattel’s shift to an entertainment-led company, and how Hot Wheels is ‘revving up in a big way too’.

To read the full interview, which was published in the October issue of Toy World, click here.