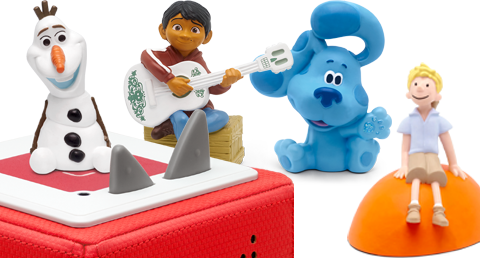 Pinky Laing, Partnership & PR manager at Tonies said: “We’re thrilled to introduce our exciting line-up of new Tonies joining the gang this month. Our partnership with Roald Dahl continues, and there’s a double dose of Disney, with Coco and Frozen releases. Pre-schoolers will love the relaunch of Animals Songs and the arrival of Blue’s Clues & You. Perfect stocking fillers for anybody shopping early.”

Roald Dahl returns to share children’s classic James and the Giant Peach on the Tonies magical storybox. The story follows the extraordinary journey of an orphaned young boy called James, who finds himself on an unforgettable adventure inside a giant peach, where he meets friendly insects waiting to take him on a magical adventure. The running time is approx. 61 minutes and suitable for age 6+.

Disney Pixar fans will enjoy box-office hit Disney’s Coco, which tells the captivating tale of 12-year-old Miguel, an inspiring young musician on his journey to unravel a story of Mexican folklore, family and heritage. The running time is approx. 46 minutes, and the story is suitable for age 3+.

Disney’s Olaf arrives to make his debut on top of the Toniebox alongside Kristoff with a two-part Tonie Frozen Adventure, including five memorable songs Elsa and Anna fans will already know and love. The running time is approx. 30 minutes, and this Tonie is suitable for age 3+.

Pre-schoolers are in for a huge treat this month as Tonies relaunch its popular Animal Songs Tonie, full of catchy, animal-themed songs, such as Five Little Speckled Frogs and fingerplay songs including Itsy Bitsy Spider – perfect for developing fine motor skills. Suitable for 3+, the running time is approx. 45 minutes.

The hit TV show Blue’s Clues & You Tonie takes pre-schoolers on an interactive adventure where they can solve mini-mysteries, play games, listen for clues and sing, tap and clap along to five catchy songs from the Blue’s Beat Band. The running time is approx. 44 minutes, and this Tonie is suitable for 3+.