Tomy has announced a new licensing collaboration with Nintendo to introduce a new iteration of its Pop Up Pirate game with family-favourite franchise, Super Mario. 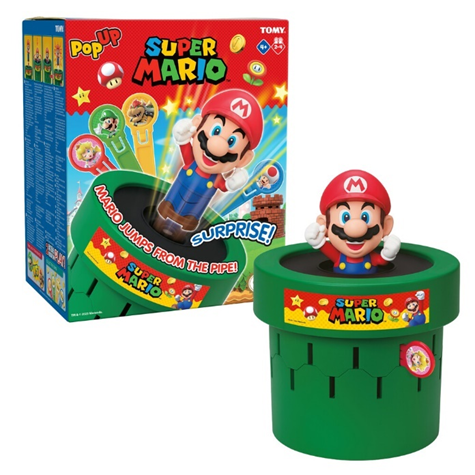 Tomy will launch the new Pop Up Super Mario Game at the end of March, with it expected to be one of the most successful pop-up games yet.

Super Mario, part of the Nintendo brand, is a key player in the licensed toy market, and since its creation in Japan in 1975, the game has proved to be a firm favourite among families, having recently celebrated its 46th anniversary.

There are three ways to play. In Classic play, Mario is in his pipe, and players must help him get out. Each player takes turns sliding paddles into the pipe and when the correct slot is picked, Mario will bounce out of his pipe and that player wins the game. Nobody knows which slot will make him pop up next, as it’s different every time.

For a longer game, there’s Coin Collection. In this version, the paddles are mixed up and placed coin side down, and each player chooses a paddle at the start of their turn. The player that helps Mario pop out counts the number of coins on that paddle and gets that added to their score. Each paddle has a different number of coins, and the player with the most coins at the end wins.

Team play is perfect for larger groups with Team Luigi playing against Team Bowser. The team that helps Mario pop out of the pipe wins that round. Players can choose to play as a team using either the Classic or Coin Collection version of the game.

Natalie Frow, senior brand manager at Tomy, said: “Pop Up Pirate has been a best-seller for years and families are always keen to play year after year. Collaborating with Nintendo gives Super Mario fans a chance to witness Mario in action, on top of encouraging decision making.”

The game contains 1 Mario figure 1 pipe, 24 colourful paddles, and easy instructions. Perfect for 2-4 players aged four and up, Pop Up Super Mario is simple to play and easy for youngsters to pick up. Games last between 15 and 30 minutes, depending on the number of participants.