Toy World’s final issue of the year is winging its way to your letterboxes and is available to read online now. 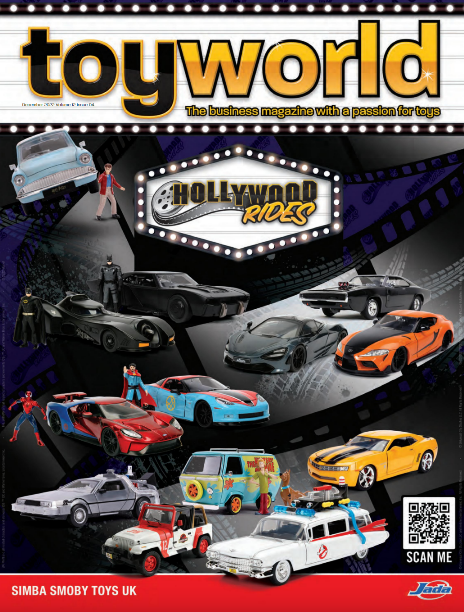 Rounding out another packed year for the toy industry, this year’s December edition – which feature’s Jada’s Hollywood Rides range on the front cover – is out now and can be accessed digitally here.

The issue includes a preview of the Spielwarenmesse in Nuremberg, giving readers an early opportunity to see what exhibitors there will be showcasing. Part 2 of the Nuremberg preview will be coming up in our January issue, with even more to discover.

There’s a special feature on the Tesco x The Entertainer trial collaboration, as Toy World’s John and Rachael visited The Entertainer’s head office and were given a personal guided tour of the Amersham Tesco Superstore toy concession by none other than Gary Grant himself.

Assistant editor Sam Giltrow also caught up with Hy-Pro’s COO Chirag Shah to hear all the latest developments at the company, and why the new Zinc Flyte scooter is a line to watch.

Of course, this month’s Toy World also includes favourite regular features such as Talking Shop, where our featured indies tell us all about trading in the run up to Christmas – including which licensed toys are shaping up to be best-sellers this festive season – Marketing Opinion from Generation Media’s Jonathan Chambers, and NPD Insight from Melissa Symonds which covers the top and fastest gaining properties in the Toy market.

There’s all the latest Licensing, Industry, People and Marketing news along with the popular Allegedly column, a look at the hottest new introductions in Fresh and much more.

You can read the December edition online here.

Work is well underway on our whopping January issue – don’t forget to send in your editorial as soon as possible as deadlines are fast approaching. Then look out for the issue in all its glossy glory early in the new year, in good time to make sure you are well prepared for the 2023 toy fair season.

A reminder that the editorial deadline is today (but this can possibly be extended slightly if you ask really nicely) while the deadline for advertising artwork is 13th December.

Last minute advertising enquiries should be directed to Mark Austin by phoning 01442 502405 or emailing mark@toyworldmag.co.uk – but don’t delay as space is running out.

Your editorial contacts are: