National Entertainment Collectibles Association – NECA – has detailed plans for a full line of Universal Monsters action figures developed in close partnership with Universal Brand Development to capture the look of the horror world’s most iconic figures.

Frankenstein’s Monster will rise up this July, depicting the classic monster from the 1931 film Frankenstein as it celebrates its 90th anniversary this year. The sculpt will capture Boris Karloff’s poignant portrayal of the misunderstood monster in black and white. A colour version of the figure will follow.

Subsequent figures set for 2021 will include Lon Chaney Jr. as the Wolf Man from The Wolf Man (1941), Boris Karloff as the titular figure in The Mummy (1932), and Bela Lugosi as the legendary Count in Dracula (1931).

“We are proud to be working with NECA to include Bela Lugosi as Dracula as an Ultimate figure,” said Lynne Lugosi Sparks, CEO of Lugosi LLC.

“NECA’s attention to detail is amazing and we are happy to celebrate the 90th anniversary of Bela Lugosi’s iconic screen performance as Dracula with this figure.”

NECA’s Ultimate format is a favorite among collectors for its complete portrayal of a character with a wide array of alternate heads, hands, and accessories so that many iconic moments from the movie can be recreated. The fifth-panel packaging also allows collectors to remove and replace without damaging the packaging.

“As a lifelong fan of Universal Monsters, this is a dream come true,” said Randy Falk, NECA VP and senior director of product development.

“I’ve been collecting Universal Monsters toys since I was a kid. This line aims to create something hyper-realistic and ultra-detailed for people like me who grew up watching these amazing movies and have always longed for definitive versions.” 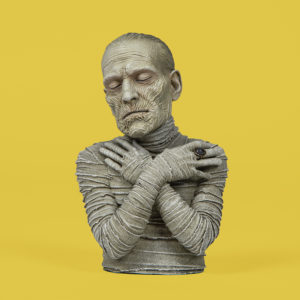 The US underground and pop culture company Waxwork Records has made its first foray into the toys and collectables market with the launch of Spinatures that kicks off with a partnership with Universal and the studio’s classic horror portfolio.

Aimed at the adult collector market, the new Spinatures launch is a collection of highly detailed turntable-spinner mini busts featuring iconic characters from pop culture, horror movies, and more. Each Spinature is fitted with a hole in their base to easily attach to the spindle of a turntable. They will then spin along with their collector’s favourite vinyl records.

Waxwork Records has grown a cult following of fans from its base on New Orleans, where the record label has made a name for itself specialising in the release of classic cinema, horror, cult, and sci-fi film scores in high quality LP packages. Waxwork revisits the original source master tapes for each release, often times original masters that were thought to have been lost or destroyed for decades.

As such, the firm is a specialist in the cult and underground collectors’ scene, one that it is now tapping into further with the launch of Spinature. The toy and collectables venture will work closely with various studios, rights holders, and family estates to bring officially approved new releases to the line-up.

Spinature is kicking off its venture with its Universal Horror Line developed in partnership with Universal Studios and its Universal Monster portfolio. The first in the line is Frankenstein, designed and produced by Waxwork and featuring the iconic monster from the landmark 1931 horror film. The partnership brings the likeness of actor Boris Karloff to the collectables scene.

More official Universal Monster Spinatures are scheduled to launch this autumn and throughout the Christmas season, including The Bride of Frankenstein, Dracula, The Mummy, The Phantom of the Opera, The Creature from the Black Lagoon, The Wolfman, and The Invisible Man.

Check out the trailer video below: