Paddington, the lovable bear who stole the show at the recent star-studded Platinum Jubilee concert in London, is coming to MENA, thanks to family entertainment media company Spacetoon.

In collaboration with STUDIOCANAL, Spacetoon will broadcast season 1 of 3D animation series The Adventures of Paddington on its Spacetoon TV Channel and Spacetoon GO online streaming service, in September this year. The series will be available with Arabic dubbing.

STUDIOCANAL’s Beatriz Campos, SVP Global Sales and Production, Financing, says: “We are delighted that Paddington, the world’s favourite bear, will be travelling to the Middle East to embark on exciting overseas adventures thanks to our friends at Spacetoon. He is adored by millions, both young and adult audiences, and we are sure his kind, optimistic and easy-going stories will charm all viewers throughout the region.”

The LEGO Group, Hasbro, and Microsoft Xbox have been unveiled among the second wave of speakers to take to the stage at this year’s Brand & Licensing Innovation Summit.

They will be joined by the likes of Revlon, Elizabeth Arden, Studiocanal, Chefclub, and Perry Ellis as well as the already announced BBC Studios and Asda for the three-day digital licensing event taking place from June 9th to 11th this year.

Day one of the event will focus on Trends and Retail and the five experienced panellists will cover questions being asked at retail right now, including:

Bezodis commented: “BL&IS is an important event for the licensing industry because, for many, it’s an opportunity to pause and listen to the pioneers of the industry and the only event which seems to have its finger on the pulse of all things licensing and retail.”

LEGO’s Freeman, added: “I am honoured to join a panel at B&LIS and provide my insights and experiences over my time in licensing and also during the last year. Touchpoints for people within the industry are essential during these times, to ensure we all keep connected and feel a sense of being part of a larger team, and I am looking forward to learning from fellow panellists and it will be great to engage with people I wouldn’t necessarily cross paths with.”

The second day of BL&IS will focus on sustainability and CSR with content curated by Products of Change and speakers from Hasbro, George at Asda, Lyfcycle, DNA Brands and Brands In Limited will address the damaging effects of the fashion industry on the planet, and how the industry is transitioning to a sustainable future.

The summit’s third day takes a deep dive into content and digital transformation, and John Friend’s panel is called Next Level: Why Gaming and Esports is Dominating the Entertainment Leaderboard. He and his fellow panellists will help delegates to understand:

BL&IS is a three-day virtual event that has been designed to help middle-management, business leaders and owners to navigate the changing retail, content and consumer landscape.

Online registration for the Brand & Licensing Innovation Summits is now open at www.brandlicensinginnovationsummit.com.

Early bird discounts of 30 per cent are available until 16 April. A three-day delegate pass at the early bird rate will cost just £175 (£158 for Licensing International members). Qualified retailers are invited to register for free.

Plans are underway to strengthen the Paddington brand across the Italian market with the appointment of the territory licensing agent, Rai Com. It follows the successful launch of The Adventures of Paddington on Rai YoYo earlier this year, a channel on which the series now airs three times a day.

Rai Com is now working to build on the show’s success with the development of a full consumer product range for Paddington, Initial categories include the distribution of the Phat Mojo master toy range, kiosk items, stationery, back to school, and FMCG.

Rai joins the existing team of Paddington agents working on the brand worldwide, which includes Studiocanal for France, License Connection for Benelux, Edebe Licensing for Spain, Partner Plus for Greece, Plus Licens for Eastern Europe and the Nordics, Copyrights Asia for Japan, Global Brands Group for China and WP-Brands for Australia.

“We are thrilled to be partnering with Rai Com to develop together Paddington in Italy. The successful launch of the show is full of promises and no doubt a whole new generation is about to adopt the beloved bear from darkest Peru,” said Sophie Kopaczynski, CEO of the Copyrights Group.

The news lands in the midst of other major developments for Paddington who, it is confirmed, will star in a third feature film, with work currently underway.

News of the film was shared via Variety earlier this week and has since been met with widespread celebration by fans keen to see the latest offering.

A spokesperson for Studiocanal told the publication: “We can confirm Studiocanal is working very hard on film three with the utmost craft and care – as with film one and two.”

Previous reports state that Studiocanal will once again be teaming up with David Heyman’s Heyday Films, while Paddington writer-director said he will not be directing the third film, but will still be involved.

With its mix of live-action and CGI, Paddington has become a global box office success, with the two previous films grossing more than $280 million and $225 million worldwide, respectively.

The movies have also previously pulled in the acting talents of Nicole Kidman, Hugh Grant, Hugh Bonneville, and Sally Hawkins, while Ben Wishaw has lent his voice to the titular bear, both in the films and the television series The Adventures of Paddington, also produced by Studiocanal.

Season two of The Adventures of Paddington will air on Nickelodeon in the US this month, before rolling out to territories around the world in April.

The French boutique retailer, Olympia le Tan, has partnered with Copyrights to launch am exclusive Paddington clutch bag collection, based on the first edition cover of Michael Bond’s ‘A Bear Called Paddington.’

The limited edition clutch features one of the most iconic illustrations by Peggy Fortnum and celebrates Paddington’s 62 year publishing and merchandising heritage.

Olympia le Tan is known for its beautifully designed, hand-stitched clutch bags, taking inspiration from literature, art and film. Each collection is limited to 77 pieces and each bag can take up to 300 hours to produce, creating a unique look and feel.

The deal was brokered by StudioCanal Licensing, the agent for Paddington in France. 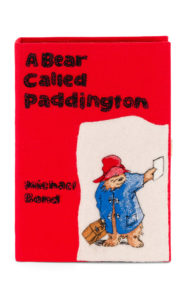 Valérie Rolandez-Barrios, director of licensing and partnerships at StudioCanal Licensing, said: “It is such a delight to work on Paddington and help develop the brand in France. Seeing this collaboration with Olympia le Tan come to life is wonderful. The Paddington clutch bag is a beautiful item and the result of a unique partnership.”

Aude Sergent, general manager for Olympia le Tan, added: “Collaborating with Paddington felt natural for our brand. We observed that we are all related to Paddington, we all know his crazy adventures and his unconditional love for marmalade.

“Embroidered on our bags, this classic of contemporary English literature gives us the opportunity to pay a tribute to this mythic book through the original illustration of Peggy Fortnum.”