To celebrate the initiative, celebrity guests were treated to an early preview of the collection at a private party at Universal Studios Hollywood on Thursday, June 16, which featured music by DJ Zack Bia, access to the “Despicable Me Minion Mayhem” ride and the Super Silly Store – where the collection will be available for purchase – as well as photo ops with Illumination’s Minions and Verdy’s Vick character, signature cocktails, appetisers and more.

Pairing two global brands, both with massive appeal, the Verdy x Minions collection reunites the mischievous Minions with Verdy’s signature character Vick after a record-setting sell-out collaboration between the two style icons in 2020. The limited run will feature tees, hoodies, long-sleeve shirts, hats, accessories, and skate decks brought to life with graphics featuring new Minion Otto paired as a duo with Vick. Additional designs include the larger-than-life Minions featured on long-sleeve tees, as well as graphic tees and jackets with a re-imagined design of Verdy’s yellow rose in a can with the Minions creating mayhem around it.

“I’m happy to continue my relationship with Illumination’s Minions,” says Verdy. “Having my character Vick made into a mascot and interacting with the Minions characters at the Universal Studios theme parks in Hollywood and Japan seems unreal. It is a dream come true.”

“Illumination’s Minions are global icons, and they’ve profoundly influenced pop culture and fashion worldwide,” says Scott Schiraj, Director, Franchise Management, Universal Brand Development. “Our first Verdy x Minions collaboration sold out in under 60 seconds. With fans asking for more, we’re thrilled to collaborate with Verdy on a new capsule inspired by Minions: The Rise of Gru and have strategically partnered with our Universal Studios theme parks in Hollywood and Japan, to exclusively launch the collection – serving fans with early access to these coveted limited-edition drops.”

Verdy, a graphic artist based in Tokyo, has worked with brands such as Nike, Human Made, Instagram, Levi’s, Louis Vuitton, Dover Street Market and more. In 2021, he entered the contemporary art world by having his first solo show at Takashi Murakami’s gallery, Kaikai Kiki in Tokyo.

HIPPEAS is spreading The Peas & Love with the launch of its Minions-themed snacks for the summer. The Chickpeas Puffs snacks brand has replaced its iconic chickpea smile graphic on-pack with a Minion character for each flavour.

The new HIPPEAS products, in support of the new Illumination film Minions: The Rise of Gru (in cinemas 1 July), will be available in limited-edition packs of HIPPEAS Chickpea Puffs in three far-out flavours and a variety of sizes – perfect for on-the-go travel and summer entertaining. HIPPEAS limited-edition Minions-themed snacks will be available nationwide at UK.HIPPEAS.com and select e-commerce channels as well as in-store at Tesco, Sainsbury’s, Waitrose, Whole Foods, Planet Organic, Booths, Ocado, Getir and Gorillas from May through August 2022.

“Minions are a global pop-culture phenomenon, and we could not be more thrilled to collaborate with Illumination on this limited-edition release of our HIPPEAS Chickpea Puffs,” says Paul Nardone, HIPPEAS CEO. “The combination of these two iconic and colourful brands – HIPPEAS, known for its bright yellow bag, and Minions, the beloved mischievous yellow scene-stealers – feels so joyful and fun. We can’t wait to share these snacks with consumers of all ages this summer.”

Home textile specialist Dreamtex has collaborated with Universal Brand Development to add Universal’s globally popular franchises to its portfolio. The collaboration will bring new home décor collections to the market across a variety of brands, including Jurassic World, Illumination’s Minions, as well as DreamWorks Animation’s Trolls and Spirit.

With Universal set to release blockbuster movies Jurassic World Dominion and Illumination’s Minions: The Rise of Gru in summer 2022, the new products will come at an ideal time to capitalise on high consumer awareness and demand for film merchandise. Dreamtex intends to capture the action of these eagerly anticipated cinema releases within its home textile ranges, bringing famous characters and their adventures to life in fans’ bedrooms and living rooms.

Dreamtex has already begun working on the collections and there has been a great response within the industry, with buyers registering their interest. The new designs and products are set to launch as early as this spring.

Illumination’s Minions: The Rise of Gru, the long-awaited next installment of the most successful animated franchise in history, is set to hit cinemas across the globe in July 2022.

During last year’s 2020 lockdown, Minions’ global popularity in the international grocery sector, which remained open, kept the beloved characters front-of-mind. The franchise has shown continued strength throughout Europe in FMCG, food, personal care and beauty categories and UBD is planning a broad-based programme in a number of categories with Yazoo, Brioche, Pez, Danone, Volvic, Perfetti Van Melle, Colgate, Avon, BIP and Glamglow.  Softlines will also be a focus as Minions: The Rise of Gru sparks further interest in the franchise.

With a roster of local agents around the globe, UBD is taking a tailored approach to retail activations and licensing and merchandising opportunities. It is a formula that has consistently delivered results, establishing Minions as a powerhouse brand.

Last summer, UBD developed a number of online-only events and promotions including the Free the Fun digital pop-up event in the UK that included giveaways and prizes that enlisted top-tier UK grocers including ALDI, ASDA, Sainsbury, Tesco, as well as toy stores Smyths, The Entertainer and Hamleys. Leading up to the film’s release in 2022, UBD’s promotional and marketing efforts will be doubled as the pent-up demand and anticipation for all things Minions is expected to be huge.

Reebok has partnered with Universal Brand Development, Illumination and the world renowned Minions franchise to grandly unveil its Minions: The Rise of Gru collection, a new footwear range celebrating the upcoming blockbuster release slated for July 2021.

Recognized globally as the world’s most successful animated film franchise of all time, Illumination’s iconic Despicable Me continues to capture the imagination of audiences worldwide. The Minions x Reebok collection injects inspiration directly from the forthcoming film that chronicles the untold story of one 12-year-old’s dream to become the world’s greatest supervillain.

The collection feature the Minions x Reebok Question Mid Gru’s Lab, an imaginative modification of Reebok’s Question Mid inspired by Gru and his laboratory. It uses different “metals” from around Gru’s lab to form a mostly unpolished silver upper, while a more-finished glossy chrome leather panel at the heel pops above his signature “G” logo stamped in place of the traditional Iverson “3”. 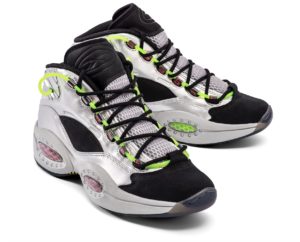 Next up is the Minions x Reebok Instapump Fury Vicious 6, a take on the Vicious 6 that Gru must first defeat to become the world’s greatest super villain. Taking inspiration from the infamous group, this asymmetric fashion-forward take on Reebok’s historic ‘laceless’ Instapump Fury mixes a plethora of contrasting prints, colors, materials and textures, while the silhouette goes big like the villains themselves. 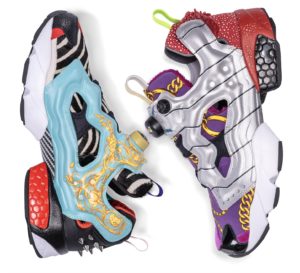 The Minions x Reebok Club C Vicious 6 meanwhile, nods to the film’s ’70s vibe and textures as well as retro colours, featuring corduroy, premium leather and nubuck panels and the Vicious 6 logo on the tongue. 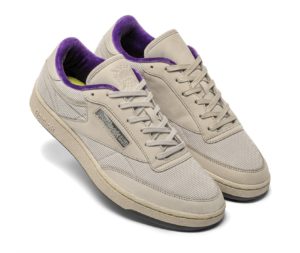 The Minions x Reebok Instapum Fury Minions pays homage to the Minions iconic yellow and blue colour palette, as a vibrant take on the Instapump Fury imagined through the eyes of the Minions themselves. It feature particular nods to the film franchise, including a Minions party insole, Minion eyes on either pump button, a banana peel graphic on the left outsole, and more. 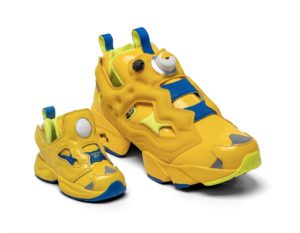 Completing the line up is the Minions x Reebok Club C Otto, a subtle yet bright take on the classic Club C which celebrates the franchise’s newest Minion, Otto. The silhouette, a second creation inspired by the Minions horde, is filled with yellow paint, Minions party insoles, pops of lime green and a splash of mud on either outsole – the meaning behind which will be revealed in the forthcoming film. 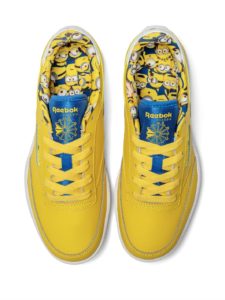 Illumination and Universal’s Minions: The Rise of Gru has been moved from its global release slot of late June and early July owing to the deepening COVID-19 pandemic and subsequent lockdown in many countries across the globe.

The move was spurred by the current lockdown in France that incorporates Illumination’s Mac Guff studio in Paris.

Illumination founder and CEO, Chris Meledandri, said: “In response to the severity of the situation in France, we are temporarily closing our Illumination Mac Guff studio in Paris. With this decision we are abiding by the French Government’s guidelines and doing everything possible to slow the spread of the virus as we care for our artists and their families.

“This means we will be unable to finish Minions: The Rise of Gru in time for our planned global releases in late June and early July. While we all grapple with the enormity of this crisis, we must put the safety and proetection of our employees above all.

“We look forward to finding a new release date for the return of Gru and the Minions.”

In 2017, the Despicable Me franchise became the top grossing animated series worldwide. Efforts will be put in locking in a new release date for the film once global restrictions have been lifted.