As Paramount gets set for a big year in 2023, Venetia Davie, VP Consumer Products, UK & Ireland, ANZ and Israel tells Sam Giltrow how its wide-ranging content is boosting toy sales. 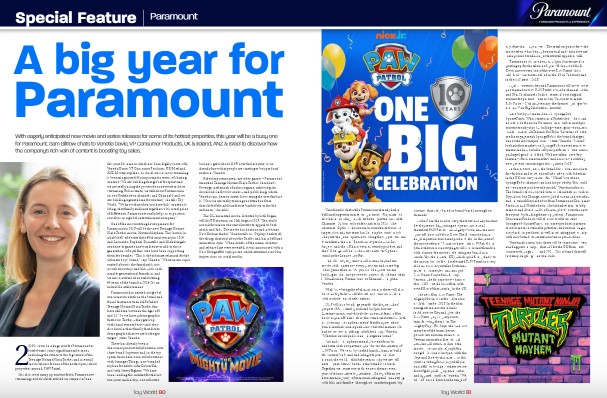 Some significant milestones will be celebrated by Paramount this year across its hottest properties, including the return of Teenage Mutant Ninja Turtles to the big screen and a movie sequel for its ever popular Paw Patrol, which also celebrates its 10th birthday.

Fuelling these releases is the constant roll-out of content, with the launch of the Paramount+ streaming service last June providing the perfect platform to expand on its entertainment offering. Venetia explains the growing importance of streaming in terms of sharing and how Paramount is really using the power of its network to drive this.

One of the most exciting developments for Paramount in 2023 surrounds the release of its new Teenage Mutant Ninja Turtles movie, Mutant Mayhem, in August, which will see a raft of consumer product collaborations including toy lines with its long-term master toy partner, Playmates, as well as a new distribution partnership with Character Options. The property, which celebrates its 40th anniversary in 2024, will also see a roll-out of some big video game releases.

A star among its content for younger children, Paw Patrol is also set for a huge year with its 10th birthday and a movie sequel in Paw Patrol: The Mighty Movie. From Paramount, Nickelodeon and Spin Master there will also be a spin-off series of the Paw Patrol show, Rubble & Crew, which airs in the US in February and in the UK later in 2023.

Speaking about Paw Patrol’s 10th birthday, Venetia says: “I think the reason we are still here 10 years later is because the brand is so fresh.”

She also discusses SpongeBob SquarePants, one of Paramount’s brands which gets the most impressions, and one she describes as an ‘icon for positivity’. “It is a brand that will just keep on going,” she tells Toy World.